Cartoonist-turned-manicurist Meghann Rosales specializes in custom nail art. Her company, Nails Y’all, has been providing nail art and natural nail care in Austin, TX since 2011. Nails Y’all will be doing custom nail art at Revelator HQ’s “Meet the Filmmaker” showcase on both weekends of the East Austin Studio Tour.

A: Nails Y’all is a one-woman show in Austin, Texas focusing on nail art and natural nail care. In addition to services like regular gel manicures, I do a lot of portraits and crazy custom requests.

Q: How does someone become a nail artist? What’s your background?

A: I spent about six months in nail school accruing hours to become a licensed nail technician, and then I took a series of tests, and here I am. Nail school teaches you the basics, like how to do a pedicure, mostly on the very elderly. I’m a cartoonist, which led me to nail art–in both cases I draw pictures in tiny boxes.

Q: Do you come up with most of the art? Do a lot of people make a request and you do it for them?

A: It’s 50/50. Sometimes clients email me their elaborate nail fantasies weeks in advance and I’ll have sketches ready. A lot of people bring screenshots or links for inspiration. And usually when someone comes in saying they have no idea what they want they actually have a pretty good idea lurking around in there–I draw it out in the consultation at the beginning of the appointment. Everybody has a page in my sketchbook.

A: The Fantastic Fest folks especially get crazy with the genre theme, which is a lot of fun for me: sci-fi, sex, gore–they get really weird with it. I’ve done some Texas filmmaking-specific nails, and also more than one set of Matthew McConaughey nails.

Q: When you’re not partying at East Studio Tour, are you headquartered out of a salon?

A: I take appointments out of Russ & Company Salon, at 1805 West Ave. You can book your spot online at styleseat.com/nailsyall. I also do parties and events!

Q: Your Wendy Davis nails were huge. Are you guys friends now? Do you know if she’s doing the East Studio Tour?

A: My grandma assumes the same thing and always asks how Wendy’s doing. I figure she’s doing great, she’s resilient, and she seems into good art, right? We know she’s got the stamina.

Q: Can you tell us about some of your favorite designs you’ve done in the past?

A: Recently I did a bridal party and the maid of honor requested a recreation of George W. Bush’s bathtub self-portrait. I had a client request an ode to her favorite restaurant, Popeyes (who can blame her?). A gentleman has twice asked for “the saddest nails ever.” The last set I gave him involved a mommy leaving with a suitcase and a word bubble saying, “It’s your fault,” to a little boy whose ice cream has toppled off the cone and onto the ground. That seemed pretty sad.

Q: Do you have any film-specific design ideas for this weekend?

A: Yes! I’ll be posting them to Instagram: @nailsyall.

Q: Do you think you could put filmmaker Paul Gordon’s face on someone’s nails? 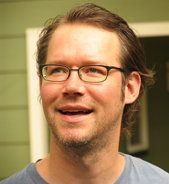 A: That handsome devil? Consider it done.

A: Tons of classic films (lots of Carey Grant), The Act of Killing, 20 Feet from Stardom, comedy specials from Maria Bamford and Chelsea Handler, all of Scandal, and Bound by Flesh, a documentary about a vaudeville sister act of conjoined twins.

Nails Ya’ll be be making custom nail art for Revelator guests and filmmakers from 1-4 p.m. on Sunday, the 16th, and Saturday, the 22nd.