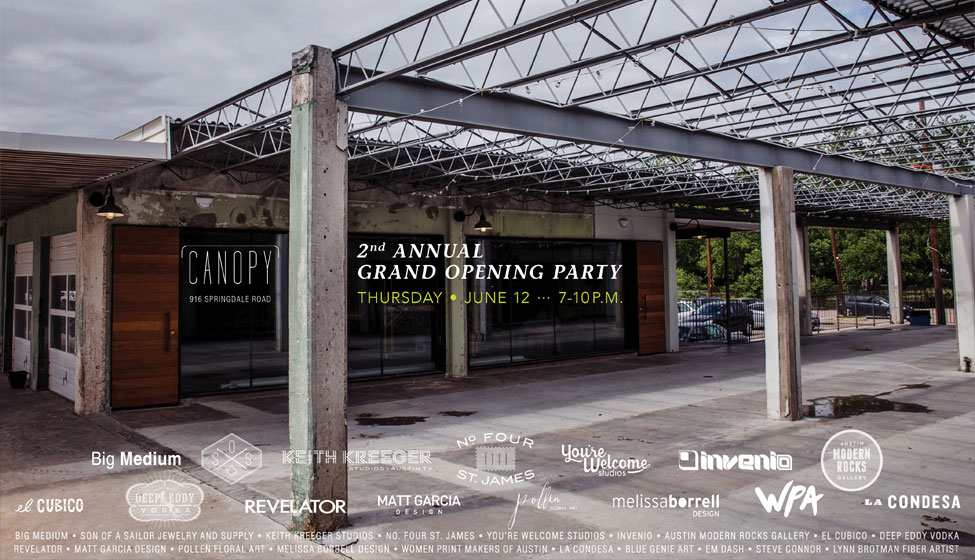 Revelator is happy to be an official sponsor and host of Canopy’s “2nd Annual Grand Opening Party.” Our offices are housed in Building #1 of Canopy, a creative community in East Austin. The studios, galleries, and creative spaces at Canopy debuted last year and almost immediately became the hub of creativity in East Austin. Last month Buildings #3 and #5 were completed and the Canopy community welcomed new faces in these amazing new studio/retail spaces.

Drinks will be provided by Deep Eddy Vodka and the El Cubico Taco Truck will be serving complimentary delicious bites from La Condesa Austin. You can also win a special 3-pack DVD prize from Revelator. There will be a silent auction benefiting local non-profit LifeWorks, with the Revelator prize pack included in the fun. There is also an Annie Ray Photo Booth, as well as music from DJ Khary Alexander of Dub Academy. Guests will be able to tour the studios and newly added retail spaces in all of the Canopy buildings.

We are proud to help host the event and expand Canopy’s presence as one of Austin’s most exciting creative spaces. We hope you’ll join us for an evening celebrating this new chapter with our creative community!